The Cover Your Butt Cover Up: PolitiFact's Stealth Edits and Incoherent Defense of Hillary Clinton

-July 3: A fact check by PolitiFact writer Lauren Carroll rates Clinton's claim that she "never received nor sent any material that was marked classified" on her private email server Half True (original version at the Internet Archive).

-July 5: After Comey's statement, PolitiFact publishes an update by Carroll laying out Comey's evidence and explaining how it undermines Clinton's claims. Despite this, Carroll says there will be no changes and affirms the original "Half True" rating.

-July 6: PolitiFact and Carroll publish an entirely new fact check on the same claim, this time rating Clinton False. PolitiFact archives a version of the "Half True" fact check.

Each iteration of Carroll's reporting has problems, so we'll address them in order:

Carroll is Clintonian in her defense of Clinton, weaving a web of wordsmithing to determine it's "Half True" Clinton did not send or receive any emails marked as classified. One of the several problems with Carroll's fact check troubles us the most:

Carroll's conclusion ignores Catherine Herridge's report last month that Clinton did in fact send an email marked classified. Carroll also fails to enlighten readers by explaining whether Clinton's emails were marked classified is moot to the overall implications of the scandal.

Carroll goes on to assert that "There is no evidence Clinton knowingly sent or received classified information" (emphasis mine). What Carroll fails to tell PolitiFact readers is that in a widely reported email exchange Clinton herself explicitly instructs an aide to intentionally remove classified markings from information before sending it to her via nonsecure methods. (1)

Apparently for PolitiFact, it's not misleading to intentionally remove classified markings and then say you didn't receive anything marked classified as a defense.

The justification for keeping the "Half True" rating was indefensible if not incoherent (red box added for emphasis):

There's circumstances where it may be legitimate to base a rating on information available at the time a claim was made, but in this case PolitiFact allows Clinton to benefit from her own deceit. Bryan pointed out in a post criticizing the update just how absurd Carroll's explanation was:


Clinton...had the very best position available to know whether she sent or received emails marked as classified. She had every reason to know the truth back in 2009-2013 as she served as secretary of state...Apparently the only reason PolitiFact gave Clinton credit for a half-truth is because Clinton lied.

Carroll's justification for keeping the rating "Half True" shows just how far PolitiFact will go to avoid giving Clinton an unfavorable rating. For PolitiFact, even acknowledging Clinton lied wasn't enough to give her a "False" rating.

The day after Comey's damaging press conference, PolitiFact scrubs its original "Half True" fact check from its website, and publishes an entirely new fact check on the exact same claim, this time rating it "False."

So what happened between PolitiFact's update and the new "False" rating? (Red box added for emphasis)

PolitiFact's justification for the new rating is at odds with its July 5 update.

Note that "the evidence FBI director James Comey presented" was cited by PolitiFact when they refused to change the Half True rating the day before! Now PolitiFact says it is the sole reason for issuing a "False" rating. Which is it?

That same evidence "was available to Clinton through her own emails" when PolitiFact rated it "Half True" in the first place.

The evidence has been available to Clinton the entire time she's been telling the lie.

We asked Lauren Carroll to explain the discrepancy on Twitter but she ignored us, as usual.

How can PolitiFact reconcile the new False fact check with Carroll's update refusing to change the "Half True" rating from the day before?

The link to Carroll's original July 3rd Half True rating goes here. If you click through, you'll see the story has been replaced by PolitiFact's default Sorry, this page is not found Etch-a-Sketch gag PolitiFact uses when it deletes a story.


Not only is this error page partisan snark directed at Mitt Romney, it also facetiously implies a technical problem as opposed to PolitiFact intentionally deleting an article from the web. 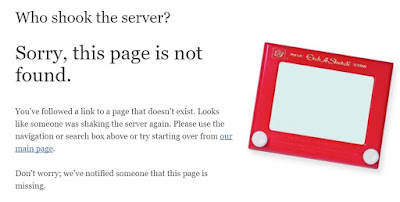 But what about Carroll's update from July 5, the one posted after Comey's press conference? Here's the key passage (red box added for emphasis):

Check out how that passage reads now (red box added for emphasis):

It seems that the way to reconcile PolitiFact's "False" rating with Carroll's update affirming the "Half True" rating is to simply delete it from the Web and hope nobody notices.

The change is a complete 180. The first version contradicts the second. It's also incongruous (They're changing the rating to "False," but the investigation undercuts her defense if she makes the claim again?)

There is no editor's note acknowledging the change. There is no update, no notice, no explanation indicating a change has been made.

This is a stealth edit. It deceives their readers. It's unethical journalism.

And PolitiFact does it all the time.

Think Carroll and her editors accidentally forgot to add a note indicating a change? What about the time a disingenuous liberal talking point about the Hobby Lobby decision was scrubbed out of a fact check without notice?

Is it possible the above stealth edit was the result of a misguided intern? The story was written by PolitiFact Deputy Editor Louis Jacobson, and edited by Senior Editor Angie Holan. Those are the two senior most writers at PolitiFact. Holan and Jacobson are the most influential at PolitiFact and one would think should know better. We asked Jacobson about PolitiFact's policy on stealth edits, and also brought this edit to his attention without ever getting a response.

Even minor errors are too much for PolitiFact to admit screwing up:

Sometimes the errors can be inaccurate by orders of magnitude, but no editors note, or even a change in rating is made. Bryan caught an example of this just last month and wrote about it:


A key figure in the story changed from $7.5 billion to $1.7 billion. Koster's exaggeration, by percentage, went from 20 percent to 429 percent. The new version of the story carries no correction notice, and the rating remains "Mostly True."

The reality is that PolitiFact routinely uses deceptive and opaque editing techniques to alter their stories after they've been published. So much so that we created a search tag for it: Now you see it - Now you Don't.

Much of PolitiFact's inconsistency and faulty reasoning can be attributed to their political bias or incompetence. But PolitiFact's routine use of stealth edits is inexcusable and unethical. Any reputable journalist should be embarrassed by such shenanigans, but PolitiFact has a long history of using them while also refusing to own up when they're caught red-handed.

PolitiFact embodies the disingenuousness they make their living accusing others of having. PolitiFact engages in the same type of deceptions it claims to expose.

PolitiFact is a dishonest and untrustworthy actor in the world of journalism. Their work should be recognized as the partisan hackery it is and disavowed as a reputable source.

Notes:
(1) It's possible there's a procedural argument to be made that, as the result of an executive order, Clinton had the authority to declassify information in very specific and narrow circumstances (including in the above mentioned case.) In any event, Clinton's defense that an email was not marked classified when she was the one directing it's declassification for the express purpose of sending it over nonsecure methods is grossly misleading.