When Critics Axe I

We don't have quite enough brave antagonistic souls to have a Criticism of the Week, so we're settling on a "When Critics Axe" for occasions where we find a critic grinding an axe against us.

Without further ado, the criticism (from a message board): 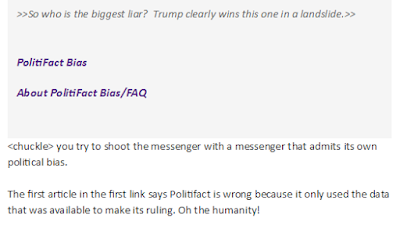 Supposedly the first article on our site at the time said PolitiFact was wrong because it only used the available data to make its ruling. Sounds like our critic made a snap judgment.

PolitiFact came around to our way of thinking in a matter of hours, quietly dropping its defense of the "Half True" rating and changing the rating to "False."

So if we're wrong on that point, so is PolitiFact. But we're not wrong.

Email ThisBlogThis!Share to TwitterShare to FacebookShare to Pinterest
Labels: When Critics Axe