This post echos the title and content of Joseph E. Uscinski's (and Ryden W. Butler's) "The Epistemology of Fact Checking" as it points to the continued poor approaches fact checkers use toward epistemology.

As I read the birthday wishes Duke University Professor Bill Adair wrote for PolitiFact, the fact-checking enterprise he helped create, I was floored by its spurious reasoning. Adair looked to validate his creation by telling readers how it has met its primary goal:


The mission of fact-checking has always been to inform, not to change behavior. And by that measurement, fact-checking this year is a smashing success. There is more fact-checking than ever — more than 100 sites around the world, according to the latest tally by the Duke Reporters’ Lab. That’s up more than 60 percent in the last year.

Indeed, the fact that we know the politicians are using so many falsehoods is actually proof that fact-checking is working. In debates and interviews, the candidates are being questioned about the claims the fact-checkers have found were untrue.

What's wrong with Adair's reasoning? I shall explain in a moment, but whether I end up informing anybody about Adair's mistake will depend on my audience.

After telling readers that the aim of fact-checking is not merely to change behavior, Adair offered readers a metric that amounts to a change in behavior. Journalists in the media changed their behavior by producing 60 percent more fact-checking sites this year than last. And by asking politicians about fact checked claims.

If readers learn the truth from fact checks, let us see that outcome in the form of hard data. Instead, Adair commits the fallacy of begging the question.

Yet here we have Bill Adair, fact checker, telling people, despite the lack of evidence, that fact-checking is working to inform people.

Here's one more plug for Uscinski & Butler's "The Epistemology of Fact Checking," which makes the case that fact-checkers take a naive approach to epistemology.

PolitiFact highlighted Adair's birthday gloat, using one of the statements we criticized as the pull quote. 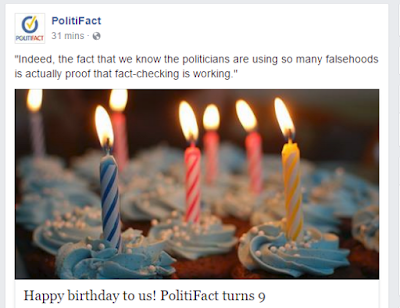