PolitiFact doubles down on deception

Back in May 2016 we pointed out a particularly deceptive fact check from PolitiFact, calling it "Mostly True" that Donald Trump had hoped for the housing crisis that led to the "Great Recession."

It's no surprise to see PolitiFact's deception recycled, as Democratic presidential candidate Hillary Rodham Clinton used a similar version of the same line during the first presidential debate, inviting PolitiFact to give her another nearly glowing "Mostly True" rating:


In the opening skirmish of the first presidential debate, Hillary Clinton cast her rival as a man who put his own business interests ahead of the welfare of average Americans."Donald was one of the people who rooted for the housing crisis," Clinton said. "He said back in 2006, ‘Gee, I hope it does collapse because then I can go in and buy some and make some money.’["]

As we explained in our earlier post, Clinton was committing a fallacy of equivocation. The deflation of a housing bubble is not the same thing as a "housing crisis." Clinton erases the distinction between the two to create the appearance Trump hoped for bad times for millions of Americans. Clinton surely knows the difference, so her knowing deception would qualify as a "lie" in the worst sense of the word.

Such a lie PolitiFact rates as "Mostly True." More than once. 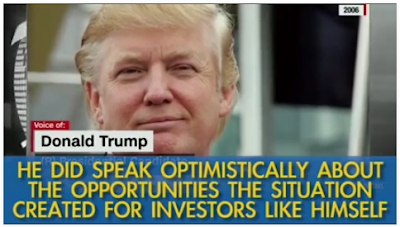 What good is a fact checker that cannot sniff out so obvious a lie?