PolitiFact Bias has tracked for years a measure of PolitiFact's bias called the "Pants on Fire" bias. The presidential election gives us a fine opportunity to apply this research approach in a new and timely way. 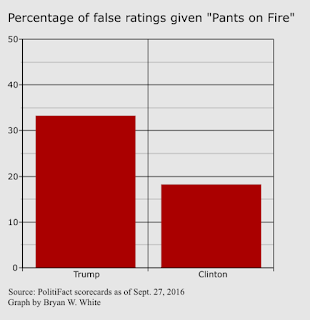 This measure, based on PolitiFact's data, shows PolitiFact's strong preference for Democrat Hillary Clinton over the Republican candidate Donald Trump. When PolitiFact ruled claims from the candidates as false (either "False" or "Pants on Fire"), Trump was 82 percent more likely than Clinton to receive a "Pants on Fire" rating.

When journalists call Trump's falsehoods "ridiculous" at a higher rate than Clinton's, with no objective principle guiding their opinions, it serves as an expression of bias.


How does the "Pants on Fire" bias measure work?

The sole difference between a "False" statement and a "Pants on Fire" statement, by PolitiFact's own description, is that the latter is ridiculous in addition to false.

As noted above, where PolitiFact has no principled means for applying the "Pants on Fire" ruling, the ratings are subjective.


Despite all the talk about how this election is the worst ever for political lies, we were somewhat surprised at how closely the Clinton/Trump comparison tracks with the party comparison over PolitiFact's entire history--since 2007.

To help illustrate how closely the presidential election comparison is sticking to PolitiFact's historical tendencies, we offer PolitiFact Wisconsin for comparison. The PolitiFact states vary greatly  compared to one another by our "Pants on Fire" bias measure. PolitiFact Wisconsin shows a bias against Democrats. Cumulatively, Democrats came in at 30 percent "Pants on Fire" from 2010 through the end of 2015. Republicans came in at 20.15 percent over that same span.

These numbers pose a dilemma for PolitiFact's defenders. Are Republicans  more honest than Democrats in Wisconsin by these numbers? Or do the numbers tell us more about how PolitiFact Wisconsin differs from PolitiFact National?

Visit our Research page for more on the "Pants on Fire" research approach.
Posted by Bryan White at 8:05 AM