Need proof that PolitiFact is staffed and run by mindless partisans? Read on.

PolitiFact thoroughly butchered the truth with a fact check of one of Democratic presidential candidate Hillary Clinton's claims last week. Clinton said parents and teachers were complaining of a "Trump Effect" in our schools. The "Trump Effect" described by Clinton involved a rise in bullying and harassment targeting "students of color, Muslims, and immigrants.”

Clinton used a survey report from the left-leaning Southern Poverty Law Center as evidence supporting her statement. PolitiFact rated Clinton's claim "Mostly True," despite the fact that the report offered no real support for the claim. I fisked the report and PolitiFact's fact check with an article at Zebra Fact Check.

The final point in that article leads to some strong evidence of PolitiFact's liberal tilt. I charged that PolitiFact used a different standard for Clinton's claim about the "Trump Effect" than it used for a recent claim Trump made about rising crime.

PolitiFact's wildly different approaches to the two claims make a great case that PolitiFact allows liberal bias to influence its work. Given the likely role of bias in slanting the fact-check, I elected to expand on the point here at PolitiFact Bias.

Trump said crime is rising, and implicitly placed blame on the Obama administration.

Clinton said, by implication, that bullying and harassment are on the rise in our schools and placed explicit blame on Trump's campaign.

The only data supporting Clinton's claim came from a small number of anecdotes (less than 100) collected from a biased sample of teachers.

PolitiFact's interpretation of the claims

PolitiFact decided Trump was claiming the rise in crime was a trend and not simply an anomalous bump (we are unable to detect the evidence that helped PolitiFact make that determination).

PolitiFact made no suggestion that Clinton was claiming a trend.

PolitiFact's approach to the evidence

In Trump's case, PolitiFact used data from 2014 and before to judge Trump's 2016 claim that crime is rising. PolitiFact for some reason did not consider preliminary data from 2015 that supported Trump's claim with respect to violent crime.

In Clinton's case, PolitiFact ignored evidence of dropping school bullying and harassment prior to 2016 to focus on the evidence available from 2016: A handful of anecdotes. It's worth noting that one of the experts PolitiFact cited in its Clinton fact check says no real consensus exists on the reliability of bullying/harassment metrics.


If you look at overall violent and property crimes -- the only categories that would seem inclusive enough to qualify as "crime," as Trump put it -- he is flat wrong. In fact, crime rates have been falling almost without fail for roughly a quarter-century. We rate his claim Pants on Fire.

The Trump addendum (after critics pointed out PolitiFact ignored data from 2015):


While the preliminary data shows spikes in crime rates in some cities, Trump’s statement was broad, without qualifiers, and it came amid comments that painted an overarching image of a nation in decline. Trump didn’t say that crime was rising "recently" or "in recent months" or "over the past year" or "in some places."

PolitiFact kept its "Pants on Fire" rating for Trump in spite of the supporting evidence.


The term Trump Effect is a product of the survey’s authors. And the survey is unscientific because it's based on anecdotal reports. But experts in bullying told us the Southern Poverty Law Center’s survey and their sense of current trends in schools supports Clinton’s point.

The Trump and Clinton claims differ in that Trump's claim lacks specifics. As we see in the Trump addendum above,  PolitiFact takes what Trump did not say as its license to interpret the "crime is rising" claim as a broad trend instead of a observation supported by contemporary news reports--news reports PolitiFact did not bother to mention in its own reporting.

The two claims also differ in that Trump flatly stated crime was rising while Clinton implied it by attributing it to "parents and teachers." Would PolitiFact have been forced to give Trump a "Mostly True" rating if he had said "Newspapers are reporting crime is rising"?

We deeply doubt it. PolitiFact would assuredly have focused on the point Trump was implying, that crime is rising, not on the mere fact that newspapers were reporting it. Maybe Trump could have raised his rating all the way up to "False" with that rephrasing?

Yet if Trump had used that phrasing, we would have an extremely close parallel between the two claims. Both politicians would imply a statistical trend. But only Trump would have widely-accepted data to partially support his claim. Clinton would not, the alleged opinions of PolitiFact's experts notwithstanding.

In Trump's case, the "Pants on Fire" ruling canceled any need to deal with Obama's responsibility for rising crime. If crime isn't rising, obviously Obama is not at all to blame for rising crime.

PolitiFact opted to simply drop the issue of causation in Clinton's case. Clinton was able to explicitly blame implicitly rising harassment ("Mostly True") on Trump without any consequences from PolitiFact.

PolitiFact's inconsistency favors the left. See the "Afters" section for even more evidence of the same.

Afters: The needs of the "many"

PolitiFact's hard-left defense of Clinton contained another notable inconsistency involving a comparison to a different fact check of Donald Trump.


Many of these teachers, unsolicited, cited Trump’s campaign rhetoric and the accompanying discourse as the likely reason for this behavior.

The Zebra Fact Check investigation suggests PolitiFact was misled about the number of teachers saying Trump was responsible for increasing bullying or harassment. Out of almost 2,000 teachers participating in the survey, 849 answered the question about bullying or biased language and of those 123 mentioned Trump. A fraction of those placed any kind of blame on Trump for anything. We would generously estimate that 25 teachers blamed Trump for something (not necessarily bullying or harassment) in answering that question. This implies that, to PolitiFact, "many" can be less than 1.25 percent of 2,000.

Yet when Donald Trump said "many" of the celebrities supporting Hillary Clinton weren't so hot lately, PolitiFact offered no hint that it would allow the bar to be set so low:


Trump has a point that out of hundreds of celebrities endorsing Clinton, some have faded.

Whether Trump had a point or not, PolitiFact rated his claim "Mostly False."

Not bothering to actually fact check whether "many" (l.25 percent?) of Clinton's Hollywood supporters aren't so hot lately seems to be the key to the "Mostly False" rating.

We invite readers to do the fact-checking PolitiFact apparently did not do: Count how "many" teachers blamed Trump for an increase in minority-targeted bullying in their schools. But don't tell PolitiFact what you find. Make them do their own research. 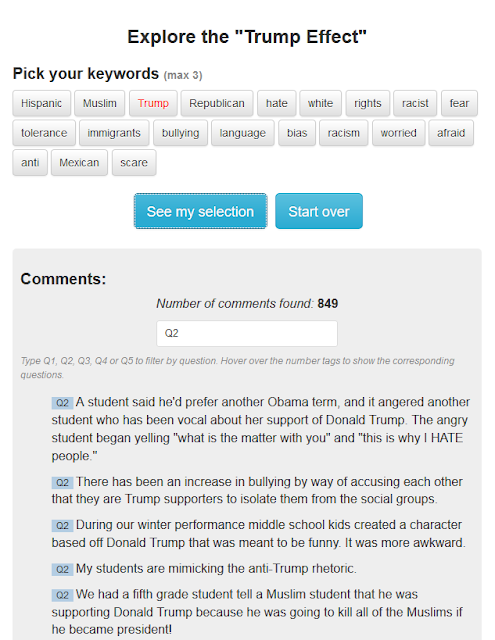