Sen.Elizabeth Warren (D-Mass.) provided mainstream fact checkers a great opportunity to show their true colors. Fact checkers from the PolitiFact and Snopes spun themselves into the ground trying to help Warren excuse her self-identification as a "Native American."

Likely 2020 presidential candidate Warren has long been mocked from the right as "Fauxcahontas" based on her dubious claims of Native American minority status. Warren had her DNA tested and promoted the findings as some type of vindication of her claims.

The fact checkers did their best to help.

PolitiFact ran Warren's report past four experts and assured us the experts thought the report was legitimate. But the quotations from the experts don't tell us much. PolitiFact uses its own summaries of the experts' opinions for the statements that best support Warren. Are the paraphrases or summaries fair? Trust PolitiFact? It's another example showing why fact checkers ought to provide transcripts of their interactions with experts.

Though the article bills itself as telling us what we can and cannot know from Warren's report, it takes a Mulligan on mentioning Warren's basic claim to minority status. Instead it emphasizes the trustworthiness of the finding of trace Native American inheritance.

At least the article admits that the DNA evidence doesn't help show Warren is of Cherokee descent. There's that much to say in favor of it.

But more to the downside, the article repeats as true the notion that Trump had promised $1 million if Warren could prove Native American ancestry (bold emphasis added):


At a July 5 rally in Montana, he challenged her to take a DNA test.

"I will give you a million dollars to your favorite charity, paid for by Trump, if you take the test and it shows you're an Indian," Trump said.

Trump now denies saying that, but in any event, Warren did get tested and the results did find Native American ancestry.

Just minutes after PolitiFact published the above, it published a separate "In Context" article under this title: "In context: Donald Trump's $1 million offer to Elizabeth Warren."

While we do not recommend PolitiFact's transcript as any kind of model journalism (it leaves out quite a bit without using ellipses to show the omissions), the transcript in that article is enough to show the deception in its earlier article (green emphasis added, bold emphasis in the original):


"I shouldn't tell you because I like to not give away secrets. But let's say I'm debating Pocahontas. I promise you I'll do this: I will take, you know those little kits they sell on television for two dollars? ‘Learn your heritage!’ … And in the middle of the debate, when she proclaims that she is of Indian heritage because her mother said she has high cheekbones — that is her only evidence, her mother said we have high cheekbones. We will take that little kit -- but we have to do it gently. Because we're in the #MeToo generation, so I have to be very gentle. And we will very gently take that kit, and slowly toss it, hoping it doesn't injure her arm, and we will say: ‘I will give you a million dollars to your favorite charity, paid for by Trump, if you take the test and it shows you're an Indian.’ And let’s see what she does. I have a feeling she will say no. But we’ll hold that for the debates.

Note that very minor expansion of the first version of the Trump quotation torpedoes claims that Trump has already pledged $1 million hinging on Warren's DNA test results: "We will say." So PolitiFact's first story dutifully leaves it out and reinforces the false impression Trump's promise was not a hypothetical.

Despite clear evidence that Trump was speaking of a hypothetical future situation, PolitiFact's second article sticks with a headline suggesting an existing pledge of $1 million--though it magnanimously allows at the end of the article that readers may draw their own conclusions.

It's such a close call, apparently, that PolitiFact does not wish to weigh in either pro or con.

Our call: The fact checkers liberal bloggers at PolitiFact contribute to the spread of misinformation.

Though we think PolitiFact is the worst of the mainstream fact checkers, the liberal bloggers at Snopes outdid PolitiFact in terms of ineptitude this time.

Snopes used an edited video to support its claim that it was "True" Trump pledged $1 million based on Warren's DNA test.

The president denied making the offer, but video from a July 2018 speech seemingly demonstrates otherwise.


The fact check coverage from PolitiFact and Snopes so far makes it look like Warren will be allowed to skate on a number of apparently false claims she made in the wake of her DNA test announcement. Which mainstream fact-checker is neutral enough to look at Warren's suggestion that she can legitimately cash in on Trump's supposed $1 million challenge?

It's a good thing we have non-partisan fact checkers, right?

The Washington Post Fact Checker, to our knowledge, has not produced any content directly relating to the Warren DNA test.

That aside, Glenn Kessler has weighed in on Twitter. Some of Kessler's (re)tweets have underscored the worthlessness of the DNA test for identifying Warren as Cherokee.

On the other hand, Kessler gave at least three retweets for stories suggesting Trump had already pledged $1 million based on the outcome of a Warren DNA test. 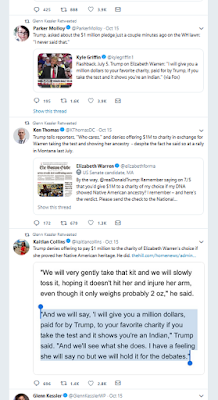 So Kessler's not joining the other two in excusing Warren. But he's in on the movement to brand Trump as wrong even when Trump is right.
Posted by Bryan White at 12:45 PM