A picture worth a thousand words?

PolitiFact's executive director, Aaron Sharockman, sent out a mass email earlier today. One of those emails asking for reader support.

The image at the top of Sharockman's email was revealing, even if it happened to reveal what we already know about PolitiFact. 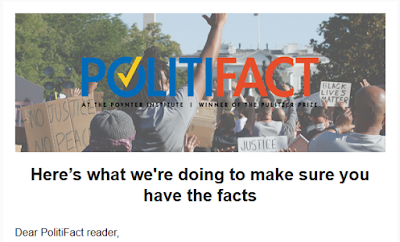 In journalism school we learned the importance of images. Journalists pay a great deal of attention to images and the messages they send.

So take a look. Break it down.

It's an image of protesters in front of the White House. We can see signs that say "No Justice No Peace" and "Black Lives Matter." The photo does not place the protestors in the distance as a third party. The image is taken from the midst of the protest. The point-of-view is from among the protestors. The protestors, and presumably their protests, are aimed at the White House.

The appeal makes sense, given that PolitiFact's fan base leans left and opposes Trump. The photo slyly (and with "plausible deniability!) sends an anti-Trump protest message those readers on the left will likely appreciate, even if many only appreciate it subconsciously.

The photo's an ideological tell.

But There's More
Before the fundraising email went out, we noticed PolitiFact's editor-in-chief, Angie Drobnic Holan, tweeting out an article blaming President Trump for violence directed against journalists.

Has anyone bothered to fact check that supposed cause-and-effect relationship?

From @TomWJones at @Poynter: Attacks on media covering the protests are simply following the president’s rhetoric https://t.co/0xm0Sv115M via @Poynter

We say that if a journalist truly believes Mr. Trump is responsible for violence against journalists, the journalist who thinks that should be presumed biased against Mr. Trump. Bias against Trump does not necessarily make PolitiFact's fact checks of Trump wrong. We emphasize these examples of bias mainly because PolitiFact falsely represents itself as unbiased.
Stop wearing the mask and we'll stop repeatedly peeling it away. Deal?
Posted by Bryan White at 11:53 AM

Email ThisBlogThis!Share to TwitterShare to FacebookShare to Pinterest
Labels: "Bias is good", "PolitiFact is not biased--here's why", Aaron Sharockman, Angie Drobnic Holan