Editor's note June 8, 2020: We intended to acknowledge when we published that Newsbusters beat us to the punch with a story on PolitiFact's Larry Elder fact check. Our version does not rely on that version in any sense. We're taking the opportunity with this update to fix an improper use of its/it's in the second paragraph

The reason we do not trust PolitiFact fact-checking?

It's because we accepted PolitiFact's challenge to second-guess its work even before PolitiFact started asking. What we found then isn't pretty. It still isn't pretty.

In Context
PolitiFact claims, as part of its statement of principles, to fact check claims in their original context.
How did PolitiFact do on that?

As the U.S. entered a second week of protests after the death of George Floyd, conservative radio host Larry Elder argued that "cops rarely kill anybody, let alone an unarmed black person."

We had no luck getting the linked Fox News video to play. Likely Fox News shoulders the blame for that. We got around the problem by going to a transcript posted at Fox News. A version of the Hannity show we found at an alternative source varied substantially from the Fox News transcript. But the transcript had the words PolitiFact used, so we're assuming the video version we found was somehow corrupted.

Here's the transcript version of Elder's words with bold emphasis to highlight the part PolitiFact quoted:

HANNITY: Shoot him in the leg he said, Larry. If he comes at you, if somebody comes up at you with a knife, just shoot him in the leg and not a word about all the officers shot, killed, injured in the process, that even last night. Not a word today.

LARRY ELDER, SALEM RADIO HOST: Yes, it's unreal. The number one responsibly of government is to protect people and property and that is not happening. And, Sean, what is so maddening about all of this, and we touched on this the other night, the premise is false. It is not true that the police are out there mowing down black people.

Again, according to the CDC, in the last 45 years, black -- killings of blacks by the police have declined 75 percent. Last year, there were nine unarmed black people killed, 19 unarmed white people. Name the unarmed white people who were killed. You can't because the media gives to the impression that this is something that happens all the time.

Obama says this ought not be normal. Mr. Former President, it's not normal, it is rare. Cops rarely kill anybody let alone an unarmed black person. And the idea that this happens all the time is why some of these young people are out in the streets, and it is simply false. Isn't that good news? It's not true!

We consider it an unorthodox treatment of a quotation to present the first part of the quotation before the second part. On the positive side, PolitiFact's construction does appear to capture the point Elder was trying to make: Police rarely kill unarmed black people. Elder's earlier comment about police not "mowing down black people" helps make clear he was talking about intentional actions resulting in the deaths of blacks.
The problem? PolitiFact treated Elder's claim as though he was making a different point.
PolitiFact:

(T)he number of unarmed people killed in encounters with law enforcement in 2019 is higher for both races than Elder claimed. How much higher is not clear.  What is clear, experts told us, is that despite what Elder’s absolute numbers may suggest, black people in the U.S. have died from fatal encounters with police at a disproportionate rate.

PolitiFact replaces Elder's point with "what Elder's absolute numbers may suggest," and uses the disagreement of experts with that suggestion to suggest Elder's point was wrong.

We'll see that PolitiFact argued a straw man.
Absolute Numbers
Elder was too vague in describing his statistic on police killings of unarmed persons, though arguably the context he established of "mowing down" was a legitimate clue he was talking about shootings. But PolitiFact did not rest its argument on Elder's ambiguity. PolitiFact argued Elder's raw numbers might produce a false impression that police killings of unarmed blacks are not disproportionate.

PolitiFact, using data from "Mapping Police Violence," corrected those numbers counting all deaths caused by police, whether on-duty or off-duty. The findings?

That does not count as a major difference. If Elder had used the same numbers PolitiFact used PolitiFact could still have claimed Elder's raw numbers "may suggest" black people in the U.S. have not died from fatal encounters with police at a disproportionate rate.

Elder wasn't saying anything about disproportionate rates any more than Mapping Police Violence was. Elder was making the point that the killings have gone down over time to become rare.

Though Mapping Police Violence only posts data back through 2013, its chart from unarmed black victims of police killings would support Elder's point: 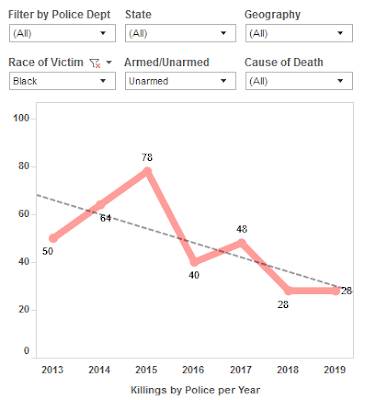 Disproportionate Rates?
PolitiFact (citing experts!) said deaths of unarmed black victims of police killings were disproportionally high. But PolitiFact made the comparison in terms of overall U.S. population. That counts as the wrong measure. Finding the proportionality of those killings requires apples-to-apples comparisons of the number of police encounters according to race.

The Centers for Disease Control has done preliminary research in that direction.
Missing the Point?
Bearing in mind Elder's apparent point that black deaths at the hands of police are decreasing, let's review PolitiFact's concluding rationale for its "Mostly False" rating.

PolitiFact credited Elder for using numbers that matched those published by the Washington Post. PolitiFact noted the Post's numbers "have increased since Elder made his claim," but PolitiFact principles say it grades statements according to information available at the time. So the increase to the Post's numbers ought to be moot in grading Elder's claim.

PolitiFact dinged Elder for not including all killings of unarmed blacks. But given Elder's point, his statistic only needs to serve as a representative benchmark for the decrease he claimed. PolitiFact presented no evidence Elder failed to do that. In other words, if counting all killings by police whatever the means leads to the same type of decrease over time, Elder's central point still finds support.

Finally, PolitiFact charged that Elder "omitted important context: that black people in the U.S. are disproportionately killed by police relative to their share of the population. But as we pointed out, share of the population is the wrong measure. In addition, it is not clear that Elder's point needs that context. A decrease in black deaths at the hands of police is a decrease regardless of  whether it remains disproportional. This part of PolitiFact's argument resembles a straw man.

This type of slipshod fact-checking occurs frequently at PolitiFact.
Afters: Experts Among Us
PolitiFact has unceremoniously dumped its past assurance to readers that it cites unbiased experts. Surveying the pool of experts PolitiFact cites tends to show a distinct leftward lean. Let's have a look at the pool of experts for this fact check:

A leftward lean does not make an expert wrong, of course. We do find PolitiFact has an apparent history of picking sources that fit its chosen narrative while leaving out dissenting voices. And that tendency seems worse than ever this year.
Posted by Bryan White at 1:30 AM