We got tagged on Facebook by a person who apparently had one of their posts flagged through Facebook's fact-checker partnership. The original post did not show for us (we're looking into that), but we found it amusing that Facebook's notice contains a falsehood: 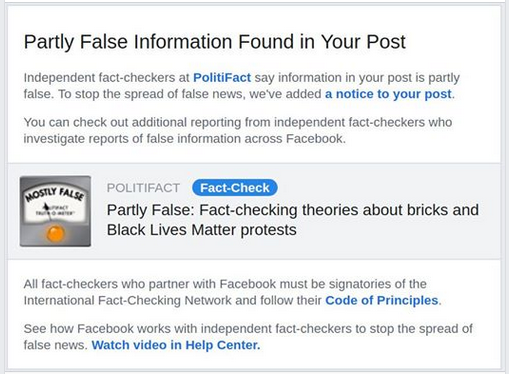 It's this part: "All fact-checkers who partner with Facebook must be signatories of the International Fact-Checking Network and follow their Code of Principles."

The IFCN verification process is soft. For example, IFCN signatories agree to "scrupulously" follow a clearly stated corrections policy. Zebra Fact Check has pointed out numerous times PolitiFact has failed in its adherence to its own corrections policy. What happens to PolitiFact as a result? Nothing. We've seen no apparent break in the Facebook partnership. More concerning than that, PolitiFact has still not acted to correct the great bulk of the errors that we've pointed out over the years. That includes things like botching a quotation. It's mostly stuff that's black-and-white error, not any kind of matter of opinion.

So, when Facebook tells you its fact checkers follow the IFCN Code of Principles they're trusting the IFCN to do the enforcement. And it just isn't happening in any strict sense.
It's worth noting, of course, that the non-profit Poynter Institute owns both PolitiFact and the accountability organization that oversees PolitiFact. No problem there, right?
Posted by Bryan White at 6:01 PM