PolitiFact took something Lt. Gov. Dan Patrick (R) said and completely transformed it into something PolitiFact could give a "False" rating.

It's another clear illustration of the fact-checking methodology PFB co-founder Jeff borrowed for use on the PolitiFact Bias Facebook page years ago. 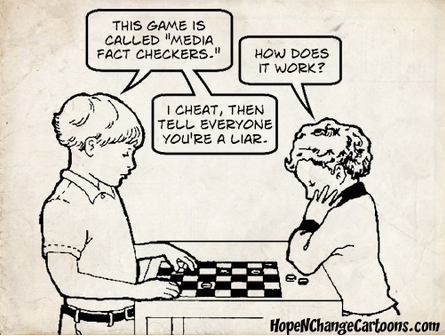 PolitiFact cheats by giving Patrick's statement a wild interpretation and then declares him a liar.

Let's break it down, starting with PolitiFact's headline/graphic/deck presentation. 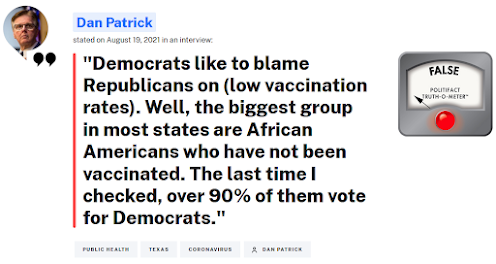 Hopefully, it's plain that using such an interpretation counts as pedantic. It's plain from the context what Patrick was trying to say.

Patrick follows with "Well, the biggest group in most states are African Americans who have not been vaccinated." The context does less to clarify Patrick's meaning, but the meaning has to fit with his point: He aims to undercut the Democratic Party's narrative that unvaccinated Republicans drive the covid-19 resurgence. Patrick's last line in the quotation supports that interpretation ("90% of them vote for Democrats").

Either of two meanings would fit the context of Patrick's point as we have described it. Patrick could be talking about the raw numbers of unvaccinated African Americans--plainly a stretch given that Blacks make up less than 14% of the population--or he could mean that in most states Blacks are the demographic with the lowest vaccination rate.

Either interpretation might serve Patrick's purpose, and PolitiFact reported he later clarified that he was talking about low vaccination rates, not sheer numbers of unvaccinated Blacks.

But that's not how PolitiFact plays media fact checkers.

Where is PolitiFact's proof that Patrick blamed Democrats, particularly Black Democrats, for the recent COVID-19 wave?

Regardless of whether or not he was referring to vaccination rates, he did not seek to change his main point, that Black populations are playing a major role in fueling the present COVID-19 surge. But there’s no evidence to support that.

PolitiFact should have noted that "there's no evidence to support that" Patrick's main point was "that Black populations are playing a major role in fueling the present COVID-19 surge."

Oddly, by the time PolitiFact reached its concluding section Patrick's point had changed to something else: Democrats are responsible for vaccine hesitancy!

In an attempt to blame vaccine hesitancy on Democrats, Patrick said on Fox News that the biggest group of unvaccinated people in most states is African Americans.

There's likewise no evidence Patrick was blaming vaccine hesitancy on Democrats, though he did say Democrats were not doing enough to get Blacks vaccinated.

His on-air statement is wrong. Black people aren’t the largest group of unvaccinated people in any state. But his revised statement, that vaccination rates among the Black population lag behind that of other racial groups, is correct.

With two plausible ways to interpret Patrick's statement, PolitiFact chose the one it could rate false and apparently gave no consideration to the one it said was true when levying its "False" rating.

We fully grant that the interpretation PolitiFact chose was the more literal of the two. But the same condition that holds when we interpret "on" as "for" when Patrick started speaking holds for Patrick's second sentence. The Fox News host asked Patrick for a quick response. Quick responses may understandably require charitable interpretation.

PolitiFact prefers not to do that for Patrick's second sentence. And that, plus the point PolitiFact chose for Patrick, resulted in the "False" rating.