PolitiFact does not advertise the fact that it applies standards inconsistently.

But it could do so without misleading people.

The liberal bloggers at PolitiFact, who pass themselves off as objective fact checkers, presented us with a new example the other day.

President Biden passed correlation off as causation. "Mostly True," said PolitiFact: Because, you know, the correlation was there. 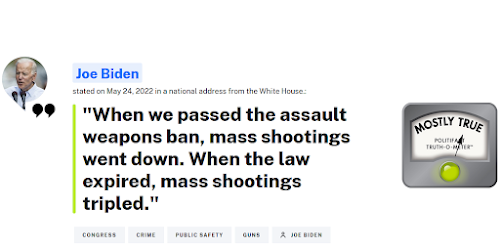 A key study backs Biden up. But the reality is millions of assault weapons and large-capacity magazines remained in circulation during the ban, and that makes it hard to tease out the law’s impact.

We rate this claim Mostly True.

Of course it's child's play to come up with an example where somebody factually claimed a correlation and got PolitiDinged for it.

PolitiFact confirmed the claimed correlation, but guess what? There was no proof the higher mask usage caused the deaths! So, "False."

The post was referencing a study that reviewed data from 35 European countries and found that in places where mask usage was higher, COVID-19 deaths were also higher. But the study’s author said there was no cause-and-effect found.

Critics of the study said masking protocols were issued in response to high rates of transmission. So it would be expected that deaths would occur while masking would be in place.

We rate this claim False.

Parallel cases. Both claims asserted a correlation. In both cases PolitiFact substantially confirmed the correlation but noted that correlation does not prove causation. Nearly polar opposite ratings resulted.