When accused of focusing its fact checks on conservatives more than liberals, PolitiFact has been known to defend itself by pointing out that it has fact checked Barack Obama more than any other political figure.

We properly ridiculed that claim because it is natural for a national political fact checker to place special importance on the statements of a president. We should only be surprised if the fact checker fails to fact check the president most frequently. And now that President Donald Trump has succeeded President Obama in office, we can do some comparisons that help illustrate the point.

Please note that this comparison does have an apples-to-oranges aspect to it. PolitiFact started out with the aim of fact-checking the election campaign. Therefore, we should allow for PolitiFact to get a slow start on President Obama's first term.

We based the comparisons on the number of fact checks PolitiFact performed on the presidents between their inauguration (two of those for Obama) and Oct. 18. In fact, PolitiFact fact checked Obama more frequently in 2009 than it did when he launched his second term in 2013. 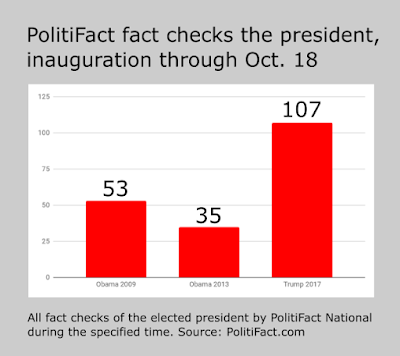 Trump has an excellent shot at supplanting Obama as the figure most fact checked by PolitiFact within just four years of taking office.

And perhaps we'll never again hear PolitiFact's balance defended on the basis of its fact-checking Obama more often than other political figures.
Posted by Bryan White at 6:00 AM

Email ThisBlogThis!Share to TwitterShare to FacebookShare to Pinterest
Labels: Aaron Sharockman, Barack Obama, Donald Trump, We are balanced because we check Obama the most