We're not sure how we missed this gem from Aug. 8, 2016 in Current Affairs magazine. 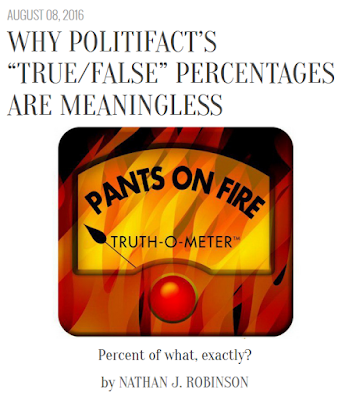 The author, Nathan J. Robinson, was prompted by the slew of misleading stories featuring PolitiFact "data" from its "report cards":


Scores of media outlets have used PolitiFact’s numbers to damn Trump. The Washington Post has cited the “amazing fact” of Trump’s lie rate, with bar charts showing the comparative frequency of his falsifications. The Week counted only those things deemed completely “True,” and thus concluded that “only 1 percent of the statements Donald Trump makes are true.” Similar claims have been repeated in the US News, Reason, and The New York Times.

But all of these numbers are bunk. They’re meaningless. They don’t tell us that lies constitute a certain percentage of Trump’s speech. In fact, they barely tell us anything at all.

Robinson does a great job of hitting nearly every problem with PolitiFact's rating system. The article is somewhat long, but worth the investment in time.
Posted by Bryan White at 10:13 AM