Fresh from our post about PolitiFact overlooking Democrat Tim Kaine's inaccurate version of something Republican Mike Pence said, we stumbled over another PolitiFact item showing PolitiFact applying a different standard.

Pence, during the vice-presidential debate, defended a Trump statement from an attack by Kaine. PolitiFact allowed that Pence's defense was valid since it addressed a flaw in Kaine's attack. But PolitiFact also charged that Pence misquoted Trump. 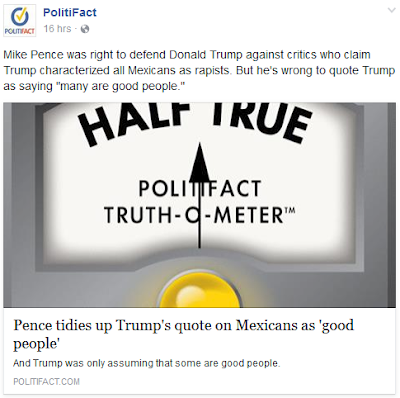 We will draw attention to the exact words PolitiFact uses, because when PolitiFact assures us in its statement of principles that "words matter," we expect PolitiFact to live up to the standards it applies to others.


Mike Pence was right to defend Donald Trump against critics who claim Trump characterized all Mexicans as rapists. But he's wrong to quote Trump as saying "many are good people."

In the case we evaluated hours ago, PolitiFact did not accuse Tim Kaine of misquoting Pence even though Kaine switched out a word from Pence's statement that changed the meaning.

How does PolitiFact judge when one person is quoting another?


Let's try a comparison between these two cases.


PENCE: He also said and many of them are good people. You keep leaving that out of your quote. And if you want me to go there, I’ll go there.

We used The New York Times' transcript of the vice-presidential debate because PolitiFact had three different versions of Pence's statement. The first one occurs in the article header and has an open quotation mark when Pence says "And":


"also said, ‘And many of them (Mexicans) are good people. You keep leaving that out of your quote."

The second one occurs in the body of the story and repeats the open quotation mark. But it adds a closed quotation mark after "people":


"He also said, ‘And many of them are good people.’ You keep leaving that out of your quote."

The third one occurs in PolitiFact's concluding paragraphs and has no quotation marks within the quotation:


"also said and many of them (Mexicans) are good people. You keep leaving that out of your quote."

PolitiFact, judging from its three different attempts at punctuation, had trouble figuring out what to do with Pence's statement. Punctuating Pence's sentence to make a quotation within a quotation would certainly lend an air of authority to its fact check. Anyone with eyes would see clearly see from that version that Pence was trying to quote Trump precisely. So if Pence got the quotation wrong then PolitiFact could justifiably criticize him for it.

PolitiFact had before it two cases where a candidate spoke of something another person said, where the words used did not match the original words.

Kaine was off by just one word, but PolitiFact did not punctuate Kaine's statement to make a quotation within a quotation.

Pence changed a word and left out two words, but PolitiFact punctuated Pence's statement to make a quotation within a quotation.

Why the difference in treatment?

Kaine's substitution of "better" for "stronger" in his paraphrase of Pence substantially changed Pence's meaning, as we explained in our earlier post.

Pence's substitution of "many" for "some" slightly changed Trump's meaning. Pence's paraphrase was objectively better justified than Kaine's.

PolitiFact did not penalize Kaine for misquoting Pence, for its story did not consider Kaine was quoting Pence.

Pence received a "Half True" rating from PolitiFact.

Pence's statement was more accurate, yet PolitiFact gave it a lower rating than Kaine's.

The latter represents a naked expression of ideological bias.
Posted by Bryan White at 9:02 PM