PolitiFact continues to determinedly destroy whatever credibility it has outside its group of left-wing devotees.

PolitiFact's cutesy-and-misleading video short captures the moment. Well, one of the moments: 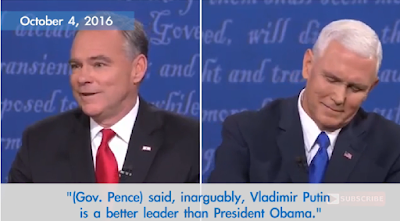 Kaine used the same line twice. PolitiFact did well to report both instances, along with providing the broader context of the first instance:


At one point, Kaine said, "Hillary also has the ability to stand up to Russia in a way that this ticket does not. Donald Trump, again and again, has praised Vladimir Putin. … Gov. Pence made the odd claim — he said, inarguably, Vladimir Putin is a better leader than President Obama. Vladimir Putin has run his economy into the ground. He persecutes LGBT folks and journalists. If you don't know the difference between dictatorship and leadership, then you got to go back to a fifth-grade civics class."

Kaine hammered the point again later in the debate.

"Well, this is one where we can just kind of go to the tape on it. But Gov. Pence said, inarguably, Vladimir Putin is a better leader than President Obama."

It turned out Pence had said "stronger," not "better." Kaine had the wording of the quotation precisely aside from that key word, making sure both times he misquoted Pence that he got the use of "inarguably" right.

Is it a big deal to get the key term wrong? Not so much, according to PolitiFact. PolitiFact rated Kaine's claim "Mostly True":


Pence did say something very similar -- but not exactly as Kaine said. Pence had said that Putin "has been a stronger leader in his country than Barack Obama has been in this country." However, "stronger" is not identical to "better." We rate the statement Mostly True.

Not identical? Certainly not. And certainly not in the context Kaine presented the claim. Remember the examples Kaine gave to show the oddness of Pence's claim?

Putin ran the Russian economy into the ground.

It's not "better" to run an economy into the ground, is it? But bucking the West and annexing Crimea despite Western sanctions takes strong leadership. Strong, yes. Better, no.

It's not "better" to persecute LGBT folks and journalists. But doing so while maintaining high public approval ratings (over 84 percent) shows strength of leadership. Strong, yes. Better, no.

Kaine fully exploited the difference between "stronger" and "better" the way a skilled liar would. But PolitiFact drops his rating only to "Mostly True" because he literally changed the word Pence had used.

Kaine would have been taking Pence out of context. even if he had quoted Pence correctly. His examples saw to that.

Is it a critical fact that "stronger" and "better" have different meanings?

Is the statement "accurate" if the key word is the wrong word?

Do PolitiFact's definitions for its "Truth-O-Meter" ratings mean anything at all?

Make-Believe: A world where PolitiFact's definitions mean what they say

How about "Half True"? Kaine's paraphrase of Pence was not wildly off. "Stronger" and "Better" have some overlap in meaning, and otherwise Kaine got the words right. Kaine's statement could pass as "partially accurate." Kaine also took things out of context, which fits the description of "Half True."

And what about "Mostly False"? Kaine's statement could also qualify as having an element of truth. Most of the words he attributed to Pence were right, though he switched out "stronger" for "better." Was that change a critical fact, given how the terms differ in meaning? Arguably so. Kaine's statement thus also fits the definition of "Mostly False." Which rating fits better amounts to a subjective judgment. The definitions overlap, like the definitions of "stronger" and "better."

Coincidentally, the Democrat gained the benefit this time. It's a pattern.