What's more useless than PolitiFact's trademarked "Truth-O-Meter"? How about its device for rating presidential promises, the Obameter?

Years ago, we pointed out an absurd rating when PolitiFact gave President Barack Obama a "Promise Kept" rating for staying in office while the nation achieved on its own what Obama had proposed achieving through a "Renewable Portfolio Standard." Obama promised to change the RPS. PolitiFact gave him credit for keeping the promise before it was kept.

In this new case, we will partly defend the president, albeit without doing him any favors. 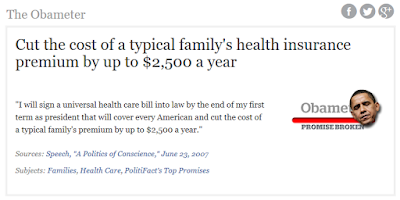 This "Obameter" item is focused on the $2,500 promise, as PolitiFact separately failed on the promise to sign a health care bill providing universal coverage.

Absurdly, Obama could only break this promise by saving a typical family more than $2,500 per year.

Obama's promise was a classic political promise because it didn't really mean anything while at the same time sounding like a wonderful promise. The president implied the typical family would save about $2,500 per year under the legislation he promised. The promise paints operations like PolitiFact into a corner. They can either grade the promise on its implied meaning, which PolitiFact did, or else admit Obama's promise effectively promised nothing.

PolitiFact deserves partial credit for highlighting Obama's failure to achieve the promise he implied. But a fact-checker can help arm the public against misleading campaign rhetoric by explaining the deception of an "up to" clause.

PolitiFact did not do that.