"Not a lot of reader confusion" IV

What planet do PolitiFact fact checkers live on, we wonder?

We routinely see people using PolitiFact data as though it was derived scientifically. Jeff spotted a sensational example on Twitter.

Let me stop you right there. This is a painfully and obviously flawed point in your entire thread. Your source has multiple issues. https://t.co/Azm2aBJHt0
— PolitiFact Bias (@PolitiFactBias) July 28, 2017

Here's an enlarged view of the chart to which Jeff objected: 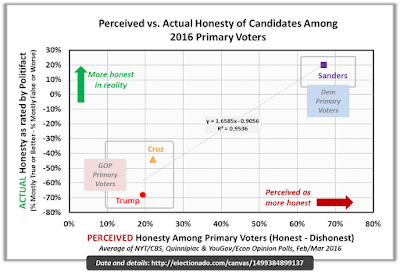 How did the chart measure the "actual honesty" of the four presidential primary candidates? Just in case it's hard to read, we'll tilt it 90 degrees and zoom in:

The guy to whom Jeff replied, T. R. Ramachandran, runs a newsletter that gives us terrific (eh) information on politics. Comprehensive insights & stuff: 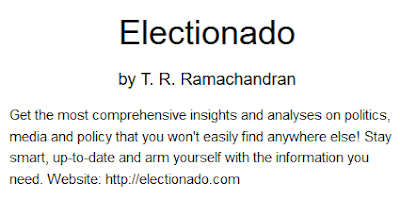 It's not plausible that the people who run PolitiFact do not realize that people use their offal (sic) data this way. The fact that PolitiFact resists adding a disclaimer to its ratings and charts leads us inexorably toward the conclusion that PolitiFact really doesn't mind misleading people. At least not to the point of adding the disclaimer that would fix the bulk of the problem.

Why not give this a try, PolitiFact? Hopefully it's not too truthful for you.

Email ThisBlogThis!Share to TwitterShare to FacebookShare to Pinterest
Labels: "There's not a lot of reader confusion out there", 2017, Angie Drobnic Holan, Obviously it's Subjective, T. R. Ramachandran