We've never been impressed with Facebook as a vehicle for commenting on articles. We at PolitiFact Bias allow it as alternative to posting comments directly on the site, mostly to let people have their say aside from our judgment of whether they've stayed on topic and achieved a baseline level of decorum.

It's a great system for PolitiFact, for it allows its left-leaning readership to make things unpleasant for those who criticize PolitiFact, and the "top posts" feature allows the left-leaning mob to keep popular left-leaning comments in the most prominent places.

What it isn't is a place for PolitiFact to entertain, consider and address criticism of its work.

A Facebook commenter mocked another person's reference to this website, PolitiFact Bias, facetiously stating that PolitiFact Bias isn't biased at all. It's a classic attack based on the genetic fallacy. We created a post awhile back to address attacks of that type, so I posted the URL. The comment seemed to publish normally, but then did not appear on my Activity Log and I could not find it on PolitiFact's Facebook page.

So it was time for some experimentation.

I replied again to the same comment, this time with the text of the PolitiFact Bias post instead of the URL, reasoning that perhaps I had been tagged as a spammer.

As before, the comment seemed to publish, but when I tried to edit to clarify some of the formatting, I got a message saying the post did not exist: 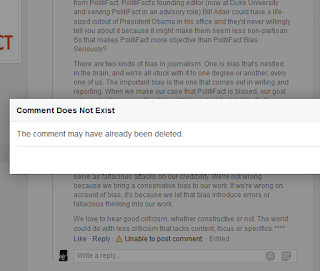 We imagine that Facebook may have some plausible reason for this behavior. But regardless of that, incidents like this show yet another lack of transparency for PolitiFact's version of the fact-checking game.