"Falsehood flies, and the Truth comes limping after it"
--Jonathan Swift

With the speed of the Interwebs at its disposal, PolitiFact on July 22, 2017 declared that no evidence exists to show Senator Bill Nelson (D-Fla.) favors a single-payer health care system for the United States of America. 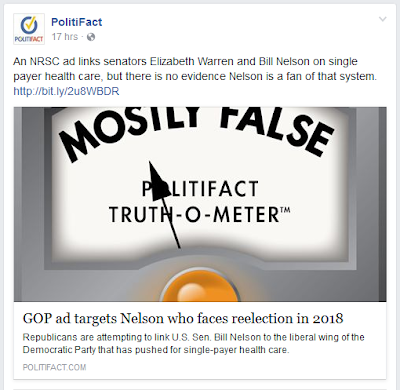 PolitiFact based its proclamation loosely on its July 19, 2017 fact check of the National Republican Senatorial Committee's ad painting Nelson as a potential supporter of a universal single-payer plan.

We detected signs of very poor reporting from PolitiFact Florida, which will likely receive a closer examination at Zebra Fact Check.

Though PolitiFact reported that Nelson's office declined to give a statement on his support for a single-payer plan, PolitiFact ignored the resulting implied portrait of Nelson: He does not want to go unequivocally on the record supporting single-payer because it would hurt his re-election chances.

PolitiFact relied on a paraphrase of Nelson from the Tampa Tribune (since swallowed by the Tampa Bay Times, which in turn runs PolitiFact) to claim Nelson has said he does not favor a single-payer plan (bold emphasis added):


The ad suggests that Nelson supports Warren on most things, including a single-payer health care system. Actually, Nelson has said he doesn’t support single payer and wants to focus on preserving current law. His voting record is similar to Warren’s, but members of the same party increasingly vote alike due to a lack of bipartisan votes in the Senate.

There's one redeeming feature in PolitiFact Florida's summary. Using the voting agreement between two candidates to predict how they'll vote on one particular issue makes little sense unless the past votes cover that issue. If Nelson and Senator Elizabeth Warren (D-Mass.) had voted together in support of a single-payer plan, then okay.

But PolitiFact downplayed the ad's valid point about the possibility Nelson would support a single-payer plan. And PolitiFact made the mistake of exaggerating its survey of the evidence. In declaring that evidence does not exist, PolitiFact produced the impression that it searched very thoroughly and appropriately for that evidence and could not find it because it does not exist.

In other words, PolitiFact produced a false impression.

A Tampa Bay market television station, WTSP, aired an interview with Nelson earlier in July 2017. The interviewer asked Nelson if he would be willing to join with Democrats who support a single-payer plan.


Well, I've got enough trouble just trying to fix the Affordable Care Act. I mean, you're talking about another major step forward, and we're not ready for that now.

The quotation supports the view that Nelson is playing the long game on single-payer. He won't jeopardize his political career by unequivocally supporting it until he thinks it's a political winner.

PolitiFact's fact check uncovered part of that evidence by asking Nelson's office to say whether he supports single payer. The office declined to provide a statement, and that pretty much says it all. If Nelson does not support single-payer and does not believe that going on the record would hurt his chances in the election, then nothing should stop him from making his position clear.

PolitiFact will not jeopardize Nelson's political career by finding the evidence that the NRSC has a point. Instead, it will report that the evidence it failed to find does not exist.

It will present this twisted approach to reporting as non-partisan fact-checking.

We let PolitiFact know about the evidence it missed (using email and Twitter). Now we wait for the evidence of PolitiFact's integrity and transparency.
Posted by Bryan White at 11:14 AM