PolitiFact, as part of a statement on avoiding political involvement that it developed in order to obtain its status as a "verified signatory" of the International Fact-Checking Network's statement of principles, say it avoids snarky commentary. 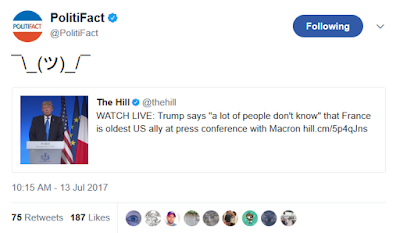 Did PolitiFact investigate to see whether Trump was right that a lot of people do not know that France is the oldest U.S. ally? Apparently not.

Trump is probably right, especially considering that he did not specify any particular group of people. Is it common knowledge in China or India, for example, that France is the oldest U.S. ally?

So, politically neutral PolitiFact, which avoids snarky commentary, is snarking it up in response to a statement from Trump that is very likely true--even if the population he was talking about was the United States, France, or both.

(Note that PolitiFact Bias has no policy prohibiting snarky commentary)
Posted by Bryan White at 10:58 AM